Review of the Onyx Boox M96 eReader, one year on!

Last July (nearly a year ago) I bought a larger format eReader that is manufactured by a chinese company named Onyx under the branding “Onyx Boox”. The model, the M96, was an upgrade to their previous one, the M92, and I had been waiting patiently for a while, desperate to have a larger eReader for textbooks.

The screen is 9.7 inches diagonally. This doesn’t sound much of an increase on a 6 inch screen, but consider that this gives 2.56 times the surface area (see comparison below). 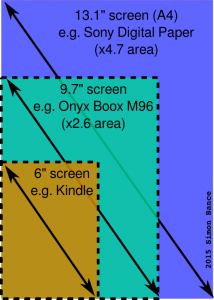 That’s pretty good, but what I really wanted was a 13.1 inch eReader – full A4 size – but the only ones available were, well, not really available or prohibitively expensive. So I bit the bullet and went with the M96 as a next best option.

A year on, and I am mostly happy with the device. It has been really useful for reading academic journal articles and textbooks, so I now find myself less frequently printing out documents that I want to read. I was even able to set up BitTorrent Sync to automatically synchronize a directory on multiple computer so that I could wirelessly transfer documents over with ease. Great! 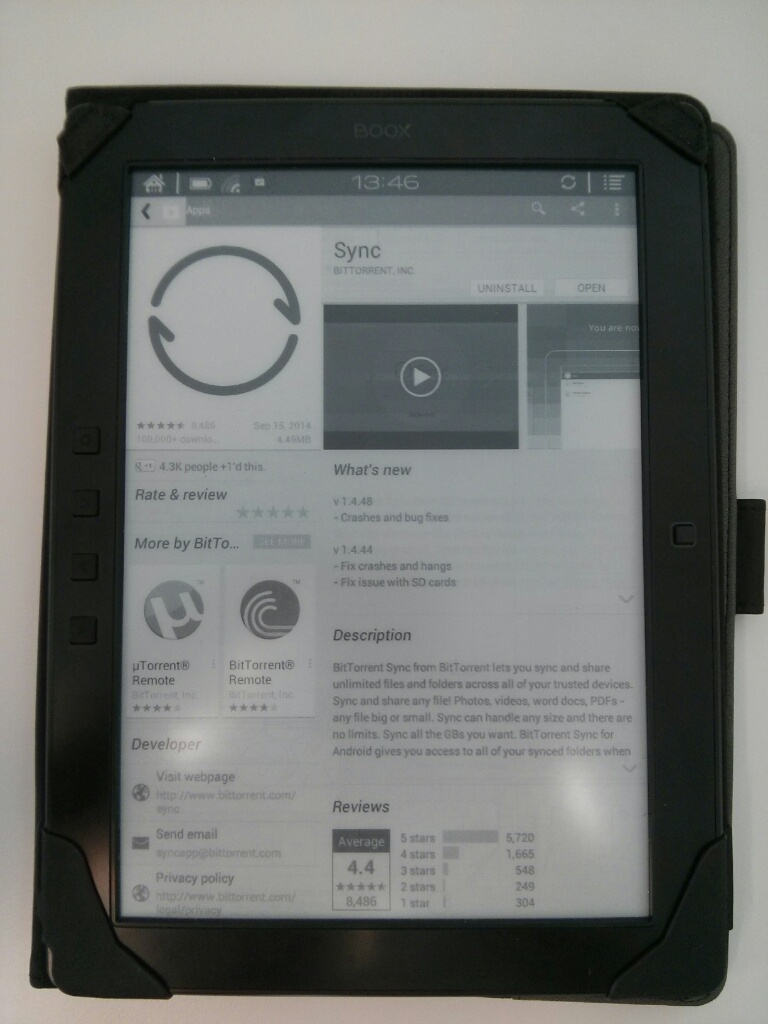 Figure: BitTorrent sync in the Play store on an Onyx Boox M96 eReader.

Here is a quick overview of my experiences with the M96. In it I highlight my criticisms and wishes for a future device.

The M96 feels well built and since I had it. The official case protects it well (apart from the power button – see below). I am a careful owner and have not dropped it, but it is often in my backpack being carried around and seems to have held up well.

Like most eReaders, the battery life on the M96 is pretty long. But the juice quickly runs out when the WiFi is turned on. A few times I have been caught out before making a long journey. Luckily, it is possible to toggle the WiFi on and off with one touch of the stylus, using the WiFi status icon. Cool!  Only problem is that the power button is unprotected by the case and the device often turns itself on in my bag. If the WiFi is on too, then, say bye-bye to your battery!

A major disappointment with the device is the outdated screen technology. At a time (2014) when we were being teased with the eInk Mobius tech, and the newer Kindles and Kobos have nice high-resolution eInk screens, the M96 uses the 9.7 inch eInk Pearl display; the exact same screen component that was used in the Kindle DX four long years earlier. The main disadvantages over the newer eInk screens are apparent when reading PDF and DJVU documents. The resolution is not enough to read some smaller text like figure captions or make out smaller features in the figures themselves.

The other significant implication of using Pearl is the weight; Pearl has a glass substrate for the active eInk layer while Mobius has a plastic substrate. Considering it’s size, the M96 is quite hefty to hold, especially one-handed.

I am sure Onyx have a good reason for sticking with Pearl; cost, availability. I am not sure what the agreement between Sony and eInk is regarding Mobius, considering Sony invested money in its development. But I hope the next generation devices will use it (or whatever comes afterwards).

Perhaps this is a problem that I could fix if I had the time, but I never got the SD card working. The idea is that the SD card gives extra storage capacity for more books, but on boot up I always had a problem with scanning of the SD card hanging forever.  I gave up on the SD card a long ago since eBooks are mostly small anyway and the internal storage is sufficient.

The OS is Android, which makes the device feel a bit too much like a phone or tablet for my liking, but the upside is that you can install Android apps, such as BTSync, that give the device added functionality. You can also choose alternative reading apps, use Google Calendar, Gmail etc. The Kindle Android app from Amazon also works, although I don’t use it. The main problem for apps is that pretty much none of them are designed for eInk. Fancy animations and other advanced graphic features don’t work well with eInk, where the screen refresh rate and greyscale often cause problems. Many apps use colour coding, for example, which is less recognizable on a greyscale display.

I bought my M96 from a European supplier so I have the “Booxtor edition” with a slightly customized OS. Booxtor has been providing updates now and then, which have fixed most of the major issues that were at first apparent (I nearly sent my M96 back in the beginning). I am not sure of the exact relationship between this and the original OS from Onyx.

Generally, reading on the M96 is good. The extra screen real estate really makes a difference when compared to my old 3rd Gen Kindle Keyboard. I still believe that it would be even better to have a larger yet screen, allowing textbooks to be shown at their intended size. A newer screen tech would improve contrast and resolution, making reading more enjoyable.

Navigating through books is not so bad when you are reading through linearly, but when you are reading a text book it is often necessary to jump around, for example to the index or the problem answers section at the back. This is one of the major weaknesses of digital reading devices over printed books. We need new interface designs to overcome this, and faster processors would probably help. However, the M96 does OK; one can use the stylus to control a slider that can choose any page number, it is just a little tricky to select precise page numbers in this way and you still need the full page to load fully before you know that you have landed on the correct one.

Zooming into text on the screen is somewhere that is always improved by having a touch interface. With the M96, touch is only possible through the stylus, which can be a little annoying, but at least the stylus allows some accuracy. Due to the slow speed of eInk this can be a slow process but it is much better than with, say, the old Kindle Keyboard. 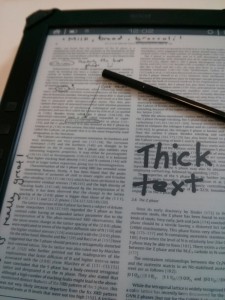 The stylus input of the M96 makes notation relatively easy. Unfortunately it always requires navigating through a series of menus to do anything. It would be great if the stylus had a button assigned to always scribble, and another to erase. Perhaps another to zoom to selection? Well, I am not a seasoned Wacom user so I don’t know how many buttons would be practical on any stylus. Update: the M96 is now being shipped with a newer, bigger stylus that has an “erase” button.

The main problem with annotation is that for many books where the text is small it is hard to write small enough. I end up zooming in first to the target annotation area. This is slooooooooow, because the stylus function has to be reset between each step, and this means going through menus on screen. In a typical scenario I counted a minimum of 8 stylus “prods” before I was actually annotating. And that was with default notation settings. It shouldn’t be this hard. It should be like using a real book!

The Onyx Boox M96 is helped greatly by the fact that no (viable) better alternative exists. The screen is still not big enough for some books, it is heavy and the display is low resolution. The user experience for someone who is reading and annotating at the same time is still far from the ease of using a real paper book. However, it is a great tool to have and makes reading from a digital library possible.

The future of large-format eReaders depends more than anything on the manufacturers’ perceptions of public demand. Most people are served well by the 6 inch Kindle and other similarly sized devices; I myself find the Kindle perfect for reading novels and other books that are pure text and do not have fixed pagesetting, and that are intended to be read in a linear fashion, cover to cover.

The possibility for making 13.1 inch eReaders has existed for some time. eInk developed the Mobius technology with Sony over a year ago and their “ePaper” device has been on limited sale in Japan and the USA for a while. The problem is the price. It also only reads PDF files, with no possibility for EPUB, MOBI, DJVU etc.

Pocketbook are marketing a 13.3 inch eReader to certain industry sectors, but it is not viable for or targeted at general consumers. Netronix recently announced they will produce one too, and it looks very similar to Sony’s. Only without the silly limitations. Onyx stated last year that they, too, were planning a 13.1 inch eReader but it seems to have been out on the backburner while they try to finish other devices first.

So things are happening, but slowly. Fingers crossed we will see some progress before the end of this year!