ZotFile for syncing PDF articles from Zotero to my eReader

I use Zotero to manage my literature collection, including all the associated PDF attachments. It really made my life easier when I set up the WebDAV file sync on Box. However, until now the only way to sync files to my Onyx Boox M96 eReader (image) was by connecting a USB cable and copying them manually to the device. Since Zotero stores the files in cryptically-named individual folders it is hard to do this manually in an organised manner and involves lots of clicking. Today I am going to find a better way.

I searched for an Android version of Zotero, hoping that I could just sync to the extra device. Aside from the fact that the article files would take up too much of my internal flash storage space there is actually no official Zotero for Android; only some discontinued third-party project called Zotero Reader and a paid-option called Zandy, which had mixed reviews on the Play Store.

But then there is ZotFile, which can be installed on your PC as a Firefox add-on or as an extension to the stand-alone Zotero, and gives additional functionality. Zotfile is able to copy the article attachment (PDF) to a location on your PC or Mac, for example a Dropbox folder, that is set up to sync with an external device. It can also extract any annotationsto the PDF that you create on the device. My eReader runs Android so I have a number of options for the software that does the syncing, including DropBox, Google Drive or even BitTorrent Sync. I am jumping between Windows and Ubuntu on my main PC and I had issues doing this with BTSync in a single shared folder before, but as long as the collection of files does not grow too big I can keep separate sync folders in Win7 and Ubuntu to avoid any issues. Using BTSync means that you have a collection of devices syncing to each other but your files are not stored in the cloud on someone else’s servers. All transfers are encrypted so in principle it is secure.

OK, here are the steps I took. 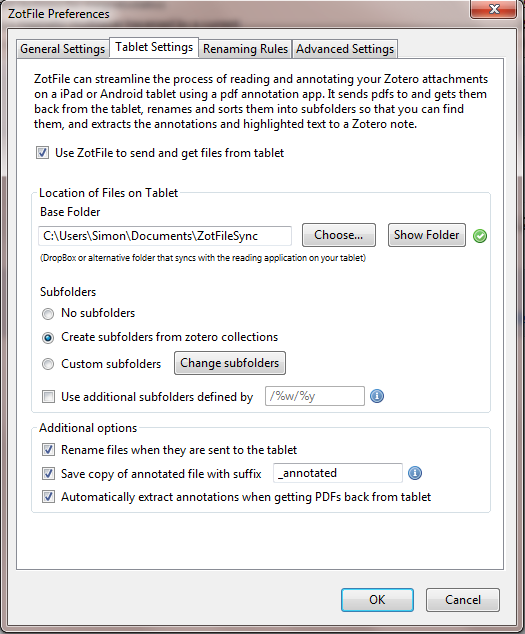 Figure: The ZotFile preferences can be found inside Zotero by going to Tools > Add-ons > ZotFile > Options.

Figure: BitTorrent sync in the Play store on my Onyx Boox M96 eReader.

Now, in Zotero (on your PC) you can right-click an item, Manage Attachments and Send to Tablet (see image below). It should shortly appear on your device, as long as it is connected to the internet and syncing with the cloud. Just like magic! 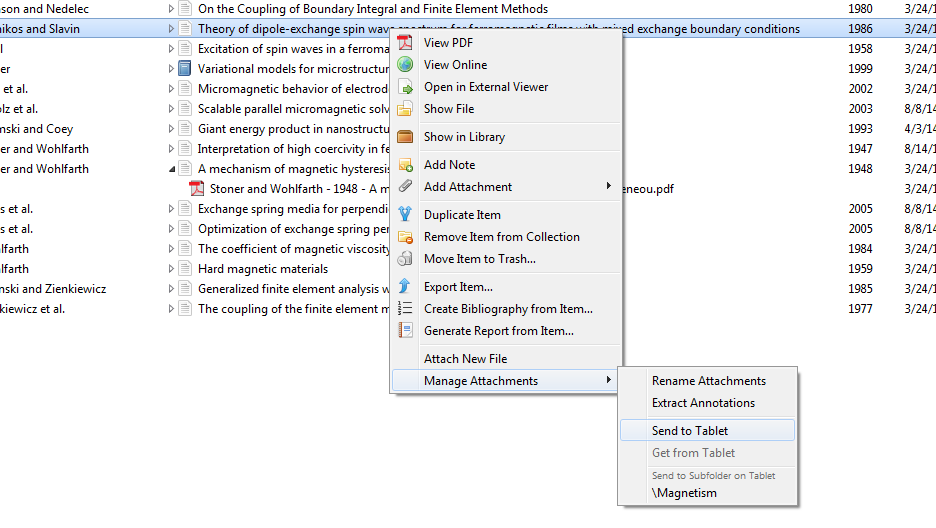 Figure: Sending an article to your handheld device from Zotero is easy with ZotFile, even though it is simply copying it to a folder that is synced by separate software.

There are a few (device-specific) issues with this solution.

These two issues combined make the process of transferring documents to the eReader a little less automatic than I would like. However, I have eliminated the need to attach the eReader to my PC via USB cables. Let’s see if the arbiters of the device will tweak the software for us in the future.

At the moment I don’t seem to be able to export my annotated PDF files, so I have not tested the annotation extraction feature of ZotFile yet.